Your Phone has been verified

Growth monitoring and promotion of optimal growth are essential components of primary health care for infants, children and adolescents. Growth monitoring includes serial measurements of weight, length or height for all children, head circumference for infants and toddlers, and interpretation of those measurements relative to the growth of a large sample population of children depicted on a selected growth chart. These measures help to confirm a child's healthy growth and development, or identify early a potential nutritional or health problem. This enables health professionals and parents to initiate action before the child's nutritional status or health are seriously compromised.
Over the last three decades there has been substantial discussion on which reference population to use in assessing adequacy of childhood growth. In 2004, Dietitians of Canada, Canadian Paediatric Society, The College of Family Physicians of Canada and Community Health Nurses of Canada published recommendations for use of the 2000 American growth charts from the Centers for Disease Control and Prevention. At that time, limitations of the charts were noted, including the fact that these charts were growth references, describing how a sample population of children grew, regardless of whether or not their rate of growth was optimal or not. It was also noted that the decision on which growth charts to recommend would be revisited as more appropriate data became available.
Increasing evidence that growth patterns of well-fed healthy preschool children from diverse ethnic backgrounds were comparable, supported the use of a single international growth reference based on healthy, wellnourished children from different geographic and genetic origins, who had fully met their growth potential. Until recently, no such growth charts existed.
In 2006, the World Health Organization (WHO), in conjunction with the United Nations Children's Fund and others, released new international growth charts depicting the growth of children from birth to age five years, who had been raised in six different countries (Brazil, Ghana, India, Norway, Oman, USA) according to recommended nutritional and health practices, including exclusive breastfeeding for the first four to six months of life. The optimal growth displayed in the WHO growth charts for infants and preschool children represents the prescribed gold standard for children's growth; hence these charts are considered growth standards.
In 2007, the WHO also released charts for monitoring the growth of older children and adolescents that had been updated and improved to address the growing epidemic of childhood obesity.
Dietitians of Canada, Canadian Paediatric Society, The College of Family Physicians of Canada, and Community Health Nurses of Canada make the following recommendations, intended as a practice guideline for medical practitioners and other health professionals. The desired outcome is that wide dissemination of these recommendations will promote consistent practices in monitoring growth to improve the nutritional status and health outcomes of Canadian infants, children and adolescents.

View all available purchase options and get full access to this article. 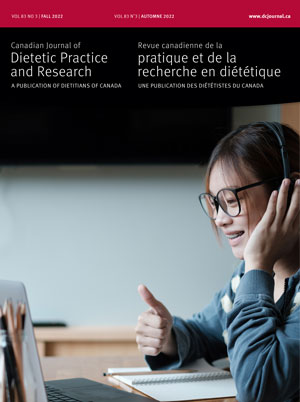 There are no citations for this item

Check if you access through your login credentials or your institution to get full access on this article.

Subscribe
Save for later Item saved, go to cart

Purchase this article to get full access to it.